Mary Mugele Sealfon
Sunday in the Park with Jazz
Composing this painting, I thought of Seurat’s ”La Grande Jatte”.  I listened to Sondheim’s “Sunday in the Park with George” while painting and considered titling it “Sunday in the park with Jazz”.  This painting is more horizontal and less a moment frozen in time than “La Grande Jatte”.  I love dance and tried to incorporate dance like movement. (Movement frozen in time?)
I also like sequences which are somewhere between stills and movies.  Movies go too quickly; stills are too static.   To encourage movement, the same figures are repeated in different poses.  I love stories.  There are potentially many little stories happening. These groups of young families were friends.
I worked on this painting on and off for two years.  Initial photos were taken in May, 2008 when my daughter and I attended the Longwood Garden Wine and Jazz Festival.  First I tried various compositions using tracings and cutouts.  Last year I did an oil sketch.  This year I tackled this enlarged version.           Mary Mugele Sealfon 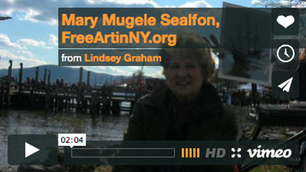 Entranced by the Hudson Valley, Mary enjoys plein air ﻿painting, portraiture and still life in pastel and oil. A third generation San Franciscan, she received a BA in painting from UC, Santa Barbara and a MA in printmaking from NYU (Thesis: "The Photographic Image in Silk-screen and Intaglio Printmaking"). She currently teaches at SUNY Orange, The Wallkill River School and Museum Village. She has also taught at the Star Gallery in Middletown, the Northern Lights Academy in Warwick, NY, and Pike County Arts, Millford, PA. Her work was featured in several shows at the Wallkill River Art Gallery, Montgomery, NY; the Beck Gallery, Hurleyville, NY; Kenridge Farm ﻿Gallery﻿ and The Arts Alliance, Cornwall, NY.

In New York City she pursued a career as Art Director and designer for various publications and companies. She also studied at the School of Visual Arts, the Art Students League and with noted regional artists including John Osborne at the Ridgewood Art Institute, NJ. Her paintings and prints have been exhibited nationally and internationally and won numerous awards. Her painting of children on the beach “Beach Memories” was used on the August 2008 cover of “Natural Awakenings” and a pastel, “Bairds Cows” was featured on the 2004 Warwick Valley Telephone Cover. She was videotaped painting the replica of Henry Hudson’s 1609 “Half Moon” while it docked in Newburgh in November 2008 as part of thirty Orange County artists interviewed for the FreeArtinNY.org web page.